As in any other country of the world, football in Turkey is the most widely followed sports that attracts millions of fans and has become a multibillion-dollar industry.

International matches of the Turkey National Football Team, UEFA Cup matches of the big clubs and the Super League competitions offer exciting moments for the audience in the stadiums and in front of TV screens and create an agenda with important developments beyond matches. Turkey hires world famous football players and coaches, and every newspaper will every day feature every step of such football players on the front page. Apart from the industrial aspect of football, this sport is currently acquiring a cultural component, becoming even more popular and starting to support various events for the fan communities.

The Turkish Football League has recently acquired world famous football stars, such as Ducth National Footballer Wesley Sneijder, who curently plays for Galatasaray, and Didier Drogba from the Ivory Coast National Football Team. The Turkey National Football Team in its history was able to participate twice in the World Cup Finals and three times in the European Cup Finals. Turkey became third in the 2002 World Cup and reached the semi-finals of the 2008 European Championship. The National Team is currently in Group A shortlist for Euro 2016, and will host matches with Holland and Latvia in September. If you visit Turkey in September, it is possible to get a ticket for this important international event and enjoy Euro 2016. If Turkey is able to participate in Turkey’s Euro 2016, the year of 2016 will be a real football feast for Turkey.

Football popularity has lately spread into every activity of the fan base and even crossed the Turkish borders. Especially Çarşı Group – a fan community of Beşiltaş Football Club is famous for its wide range of activities in the sphere of blood donation campaigns in various locations, aid campaigns for earthquake victims, events and concert arrangements against violence in football. Today, some Çarşı Group events may take place in such cities as New York City, London and Berlin. Galatasaray fan communities UltraAslaN and Tek Yumruk and Fenerbahce Fenerbahçeliler and Sol Açık organize similar events. With recently increasing activities of the fan clubs, almost every club in Anatolia has its own fan communities with distinctive features, that become more popular over time. 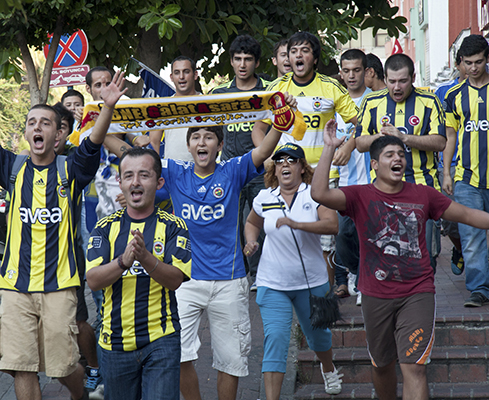